These photos are a view into the confined and personal environment of home which has been and still is part of my enthusiasm for seeing, as well as for photographing. This time, however, after the outbreak of covid-19, the compulsory home stay and the consequent depression, photographing from this environment has transformed into visual exploration of the environment to find a small and sometimes blind peephole to the outside world.

This is Pamenar, a historical neighborhood as old as the city of Tehran, dating back to the Safavid (18th century).Walking the neighborhood, in an area that at some point was considered the heart of old Tehran, I beheld forms and colors — manifesting themselves on doors, walls, and passageways — to reached empty spaces that, more than anything else, connected me to a “past and present”. The radical transformations that have made Pamenar what it is today are part of a history that meets the eye at an angle in its strange incongruity.

The Pamenar Collection is part of an ongoing series on various cityscapes of Iran. These photographs were taken over a two-year period (2013-2014) on holidays.

That place is Anzali; a port city in the margins of the Caspian Sea. Somehow when I saw this city, I discovered myself in it; though I was not even born there. As I wandered around constantly in different days and seasons, I found it a lonely city. I saw the city in rainy days, looked at the people closely and even watched it keenly in its reckless silence. Once I focused accurately on this geographic site, and as I encountered certain issues and faced the existing elements in the city, I came across a rather unconventional conversation; I encountered decay and dampness in addition to grayish and gloomy people. I then realized that the body of this city, including the architecture, buildings, benches, alleys, streets, shops, docks and the beaches speak for what is called Anzali way beyond the words spoken by the people.
For me the metal bridge, the Qazian bridge, the Lagoon, the Boulevard, the GhalamGoodeh Island, the Mianposhteh Island are graphic haikus in the seasons when there is no tourist around.

The “Anzali” collection is a sequel to the photos I have taken from the cities, places and other landscapes of my country, Iran, which has had my eyes fixed on it during the recent years. The collection of the photos presented in this book was photographed within two years (2012-2014) through my trips, while each trip took two to three days.

Even in the possibility of being, in this place that one day was one of the luxurious hotels of Iran I face desolate and soulless rooms.
Room number 16… room number 8… room number…
Anywhere in this abandoned hotel I catch the sight of people that are impassive and archaic like the color of walls.
The eyes search along with me and take me to the quest of the possibility of being.
The story that lingers on as long as you are!

Once again, they are in front of a photographer. Now nobody dies for them and nobody falls in love with them. Only their memory comes and goes every now and then. In their time, they would step into a photography atelier to eternalize themselves and today I, the photographer, have stepped into their sanctum to record their photos. When they look at me from the two-dimensional frame of their photos; I feel I should say, “Please smile!” and they smile only for a moment and as soon as I manage to push the shutter I find myself in the atelier; but their photographs have been there for years and the whole affair takes place only in my imagination.
The photographs of the present exhibition have been taken during the years 2004 and 2006 in one of the old graveyards of Qazvin. Some of the photos are more than 50 years old. No modification has been made on the photographs.

Generally, I choose places for photography that have been seen many times and this being seen helps me find more: Masoule, graveyard, sea, and so on. The first time I entered Masoule, a heap of others’ photographs passed through my camera visor: windowpanes, storksbills, terraced roof tops and…but finally, I could manage to find my own view of this ancient city. I find a kind of poeticality in this city, which is formed at times by individuals, at times in things and sometimes in empty spaces. 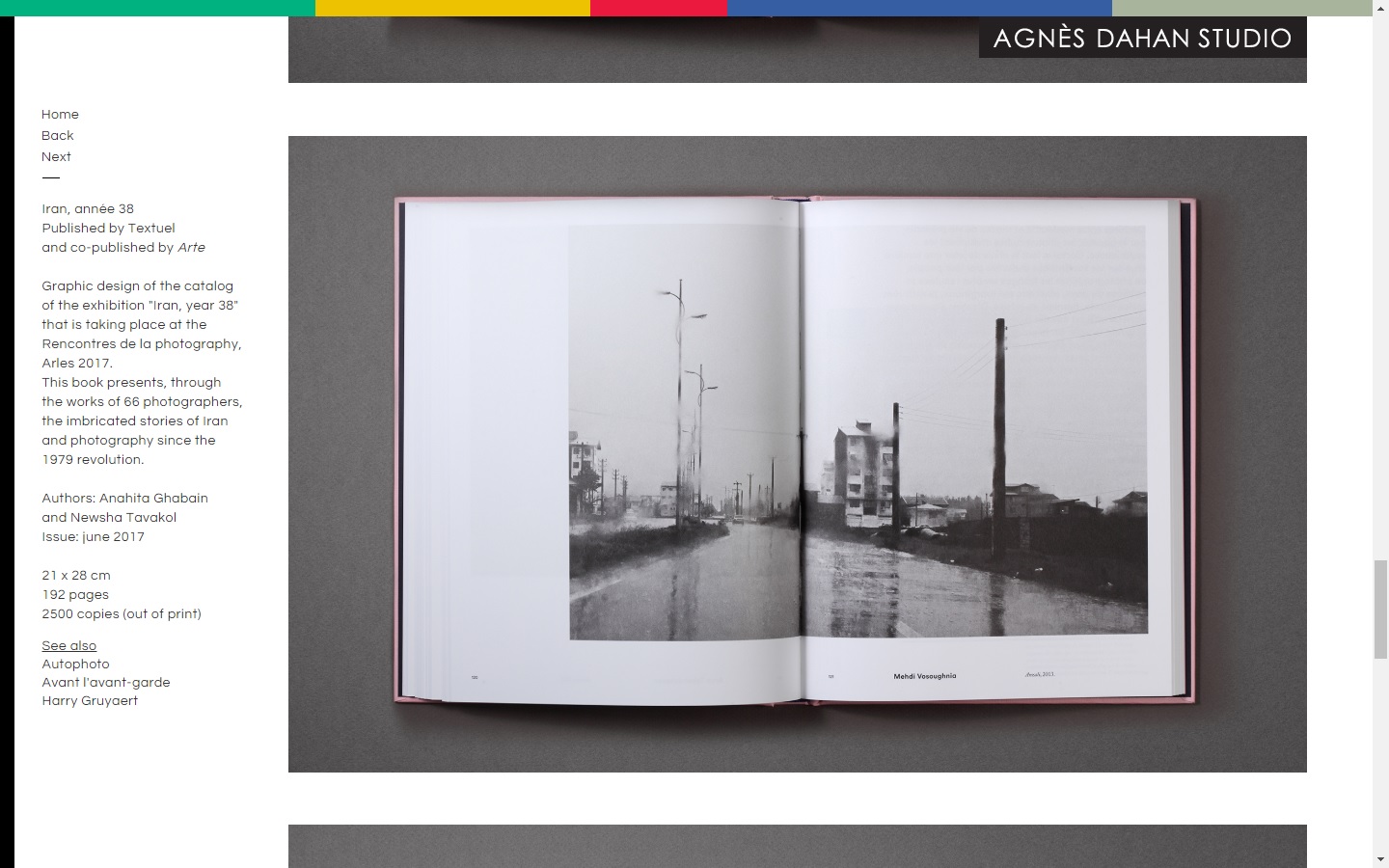 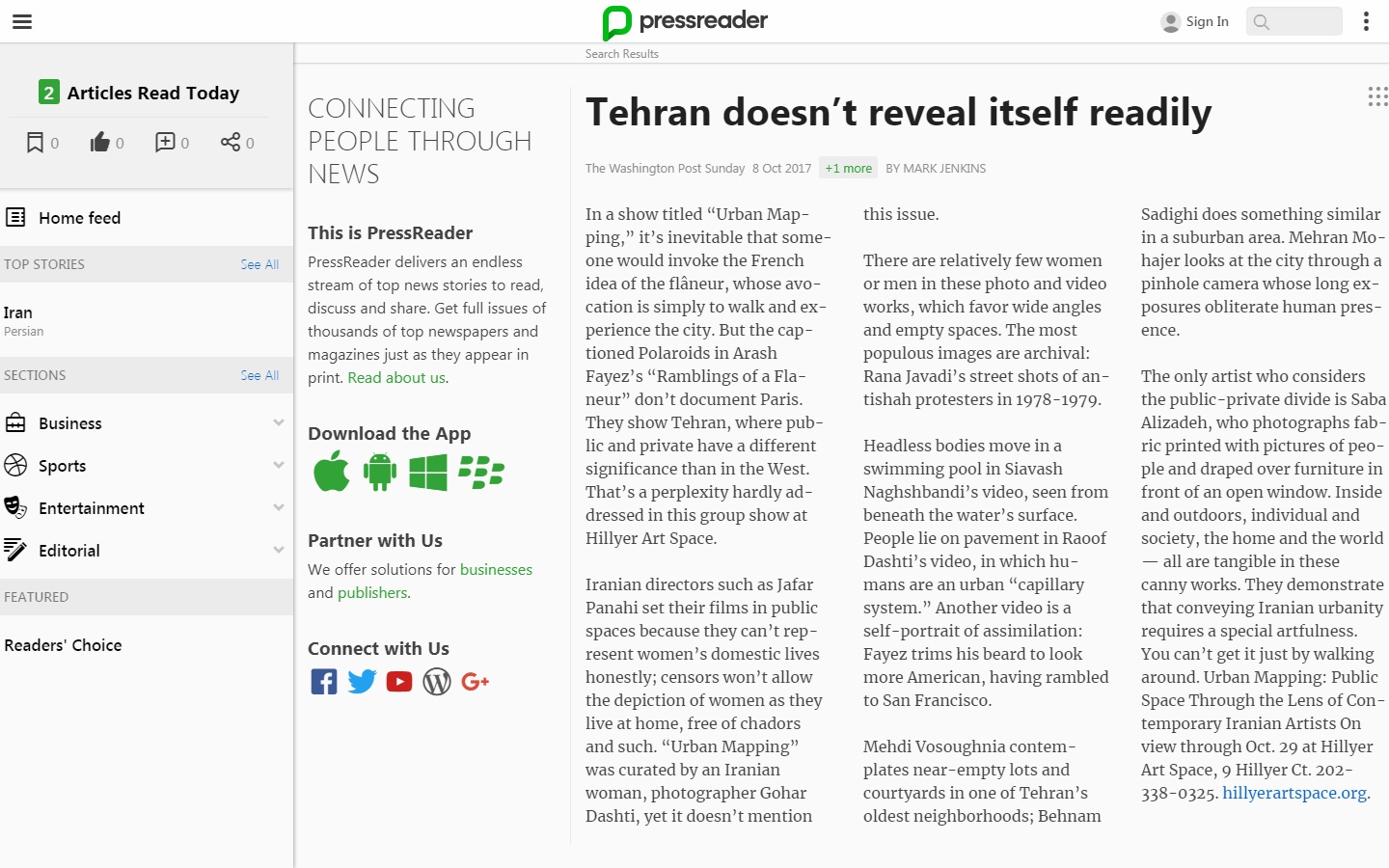 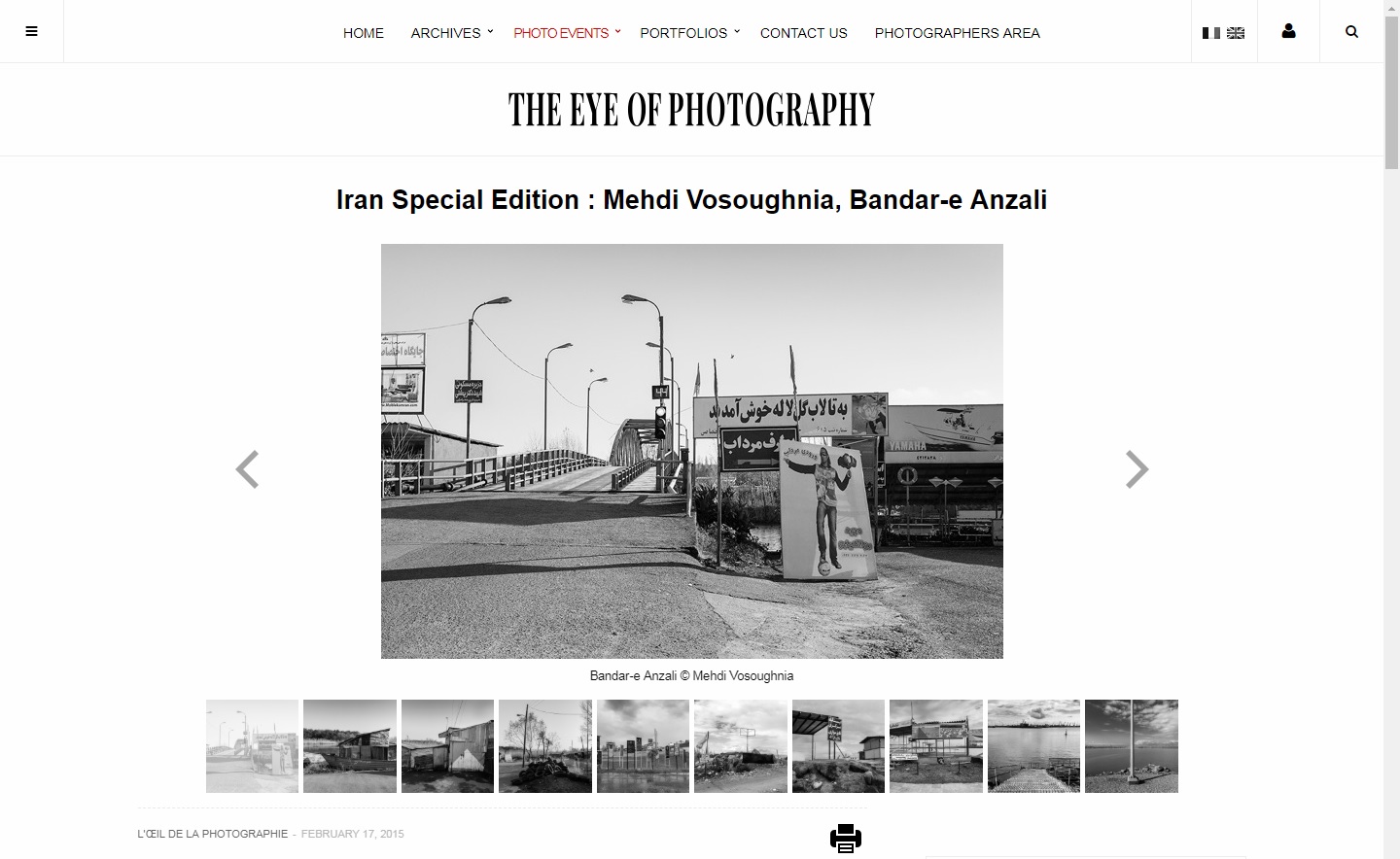 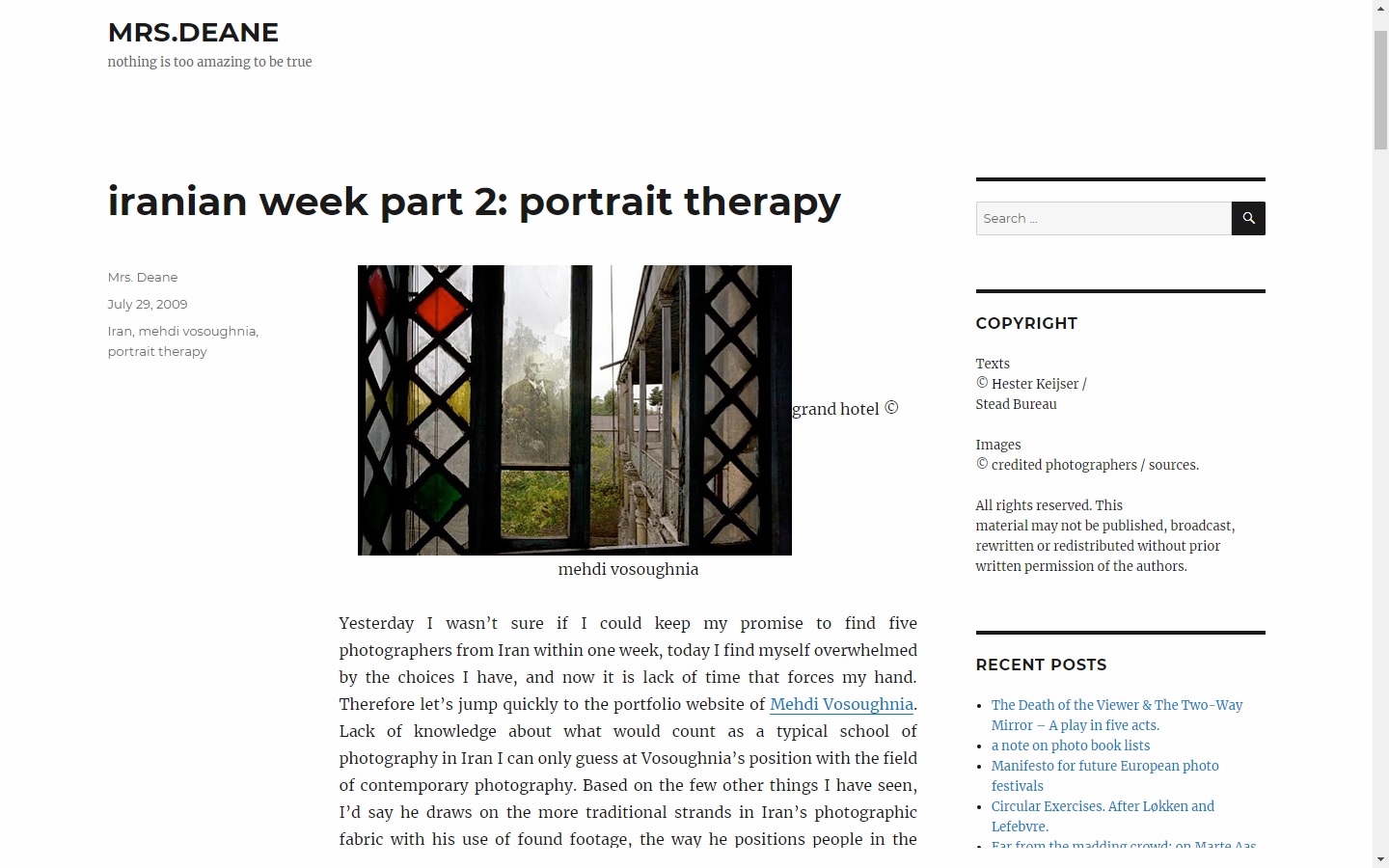 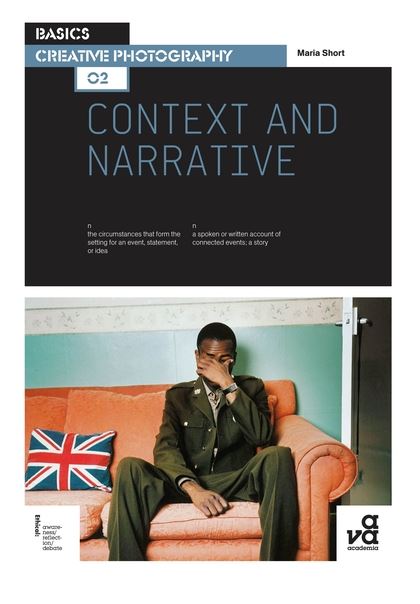 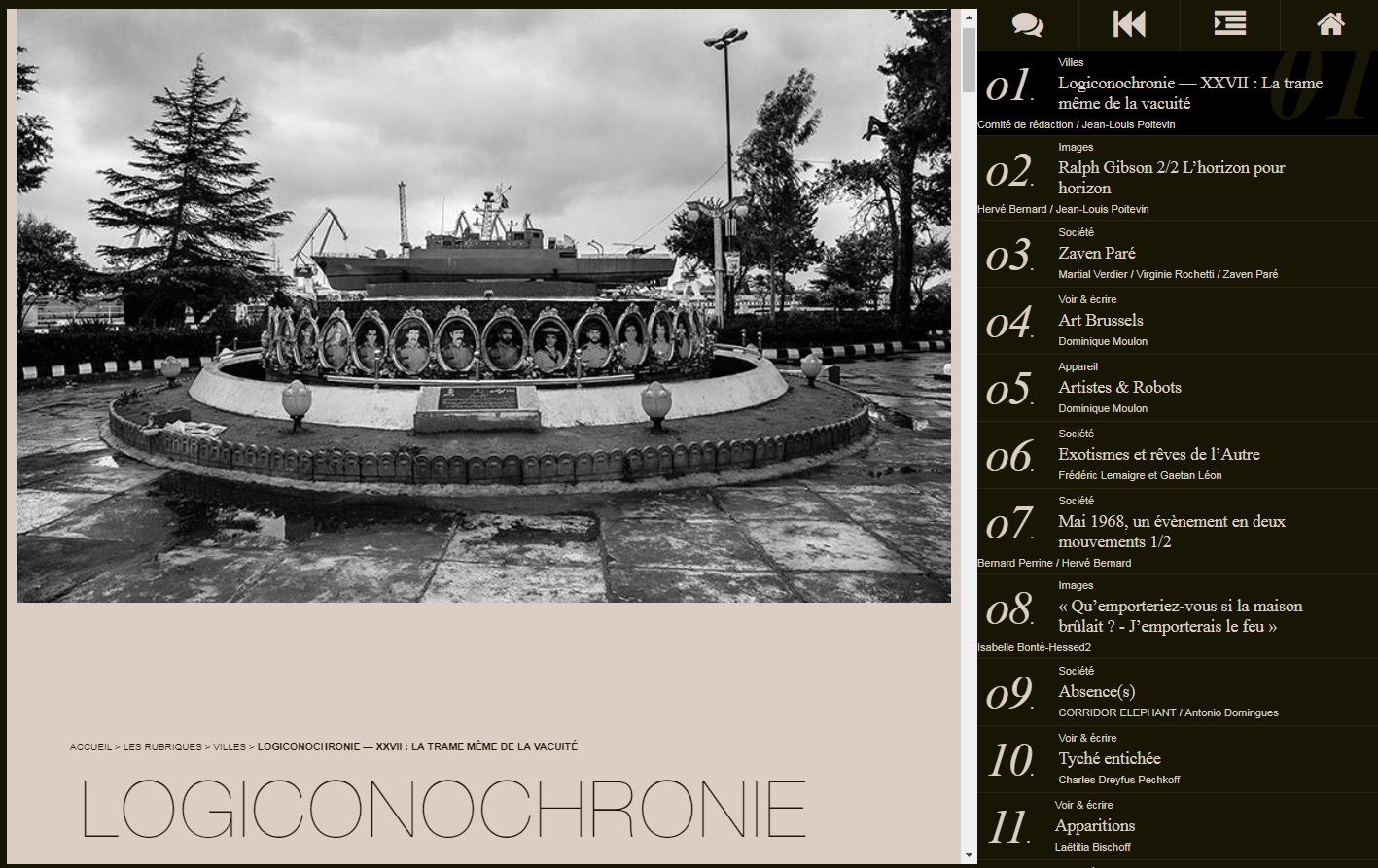 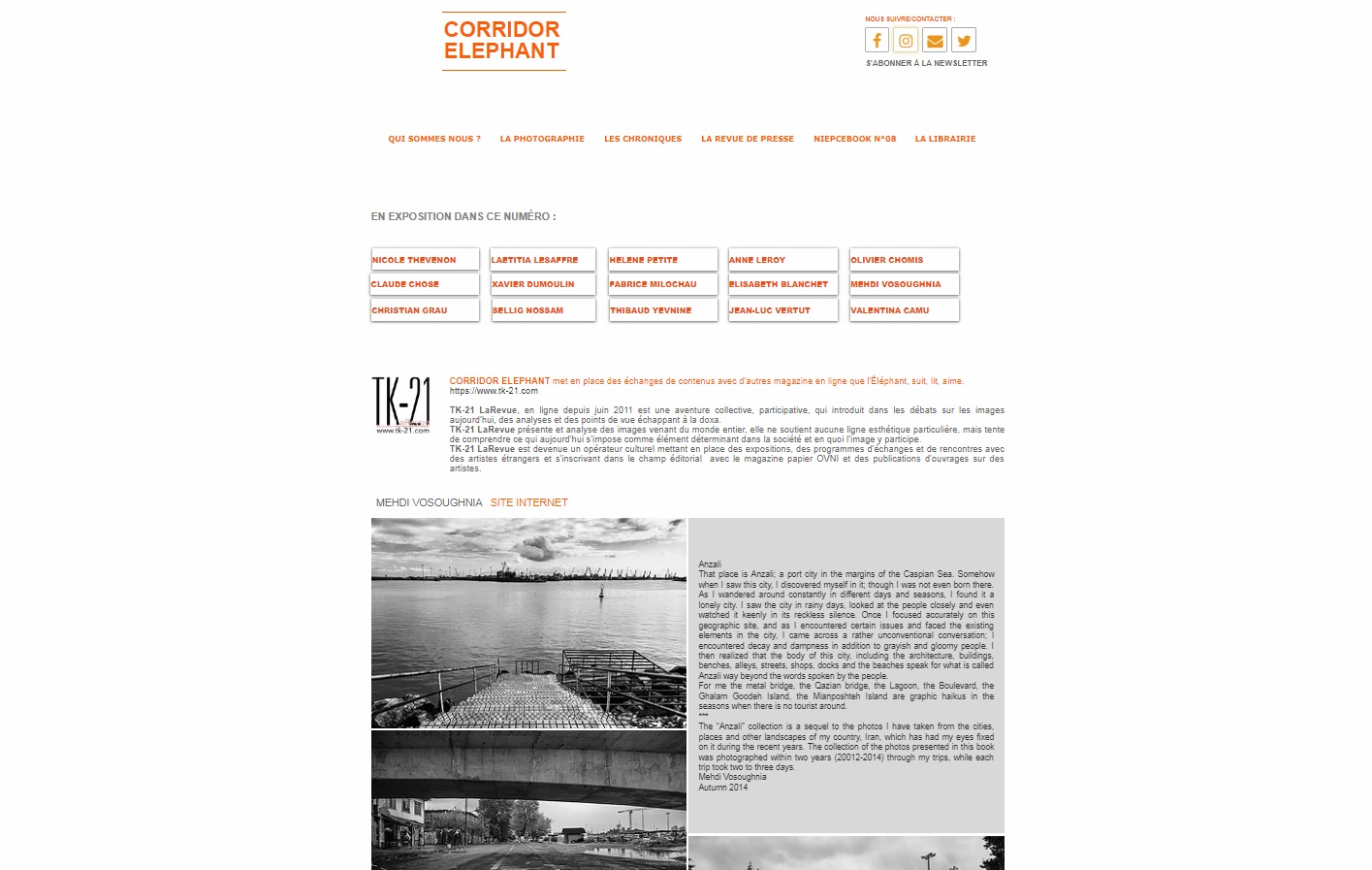